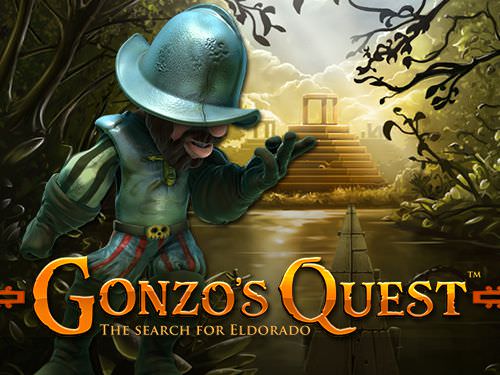 The Gonzo’s Quest slot was first released in 2010 by Net Entertainment and is still popular today. The slot game is based on the adventure of Gonzalo Pizarro who went on an adventure to find the lost El Dorado city.
Greet the game’s story:
The game has an amazing intro movie for its story:

Game’s Mission and Details
The mission of the player is to help Gonzo find the city of El Dorado. Hitting the reels will reveal the path through the Amazon jungle and good prizes to help the adventure go on.

The game features 5 reels that come as an avalanche instead of the classic reel spinning. There are three rows and 20 paylines that unlock cool bonuses and multipliers. Also, the game has nice 3D graphics animation and cool forest, stone sounds and theme songs that keep the player engaged.
Players can bet up to £50 per spin, on 20 paylines, perfect for players of all levels. The jackpot is 2500 coins.

Features
The main features of the game is the Free Spins, aka Free Falls Bonus that is triggered by landing three Free Fall scatter symbols on three consecutive reels. The prize is 10 free spins or free falls, with different multipliers than the base game: 3x, 6x, 9x and 15x. Gonzo becomes very active when you win in the bonus phase of the game, showing his happiness by dancing. More free spins can be triggered along the game.

While playing the bonus round, players can win extra free spins if they hit three Free Fall symbols. The new free spins will add to the current ones shown in a message under the reels.

The game has a high rate of return for the players, being one of the games that can give really big wins, but also many smaller winning opportunities.

Gonzo’s Quest is very popular in the Scandinavian countries, but rapidly gained popularity in the UK, people still playing it today since being released in 2010. Help Gonzo find the lost city of El Dorado by playing the game online and enjoy his secret funny dance and moonwalk moves.